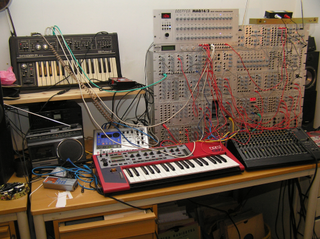 Is it possible to unite the virtual analogue modular with the real thing?
I tried it out and the short answer is: Yes!
To get a longer answer, keep reading…
I did a lot of modular patching in the early 80ies, mainly on Buchla and Roland 100 systems, with old school tape loops and 4-channel tape recorders. I quit the whole thing after some years, but started again in the late 90ies with the virtual alternative: The Clavia Nord Modular. When the Clavia G2 virtual modular hit the market some years ago I started an intense period of patching.

I consider myself a semi pro in the music area. I have produced a lot of music for a series of scientific documentaries for Swedish Television. My musical interest goes from soundscapes and noodles to electronica jazz and dance music. But it has in common that I use a lot of monophonic voices I a rhythmic texture, rather than chord progressions and complex melodic and harmonic structures.

But using the G2, with Korg Electribe as rhythmical backup, I missed something. The creation and modification of gates and control voltages is great in the Clavia G2 but the filter didn’t have that magnificent “omph” or sharp self-oscillation. I also felt that the digital emulations of VCO´s lacked personality and bite. And with some experience, it was too easy to predict what different modules did to each other.

Concerning complex gate and CV structures, the Clavia system is unlimited, and a magnificent tool. But sonicly, I felt I was hitting the ceiling. Maybe a more talented patcher then I would pass that barrier, but I didn’t.

So I decided to try to combine the Clavia G2 with a real analogue to get a combined virtual/real modular. It was a fun, but expensive trip to boutique electronic devices.

The Clavia G2 has a lot of midi in and out modules. The Doepfer MCV 24 midi-CV converter seemed to be the right tool. It can deliver 12 channels of CV and gate signals, or 24 channels of CV to use at any purpose.

And to choose Doepfer for the modular was a simple choice. Vintage modulars are rare, and all the other contemporary modular synths are more expensive, or DIY kit for a more experienced synth builder than me. There are competitors, like Blacet and Analogue Solutions. But AS was a bit higher priced, and had fever (but more versatile) modules for sale. Blacet has no agent in Sweden, and also has a limited number of modules.

The first thing was to plan the system. I don’t know how many sketches I made, and all seemed to suffer from compromises.

One good thing with the Clavia G2 is the high number of modules available. In complex patches and performances (several patches that are connected internally), it is possible to use maybe 30 or more of VCOs, and dozens of S/Hs filters and so on. But as I didn’t has unlimited funding, I had to reduce my demand.

My first plan was simple: One 3 HU rack of VCOs, one for VCFs, one rack for VCAs and one for Envelope Generators and LFOs. Besides that, I ordered a 6 HU rack with CV-processing modules. After have used the system for some time, I bought some more modules, and ended up with a fairly big system. It´s main components are:8 VCOs, 8 different VCFs, 9 VCAs and 10 Envelope Generators. Together it is just over 70 modules, including some from Analogue Systems that I bought second hand. It is now about the size of 4 x 6 HU racks and 1 x 3 HU rack.

From the beginning, it was things that I underestimated: The need for full quality VCAs (the Doepfer has “low cost vcas” that are best for CV processing) and multiple jacks, as well as the never ending need for more cables. But after completing with some more VCAs, multiples and VCOs, I think it is pretty balanced now. Or, at least, it has to be, my synth funding are reaching its limit.

I have put a lot of money in this project, but lesser than people spend on a motorcycle or a boat. But to me, it is worth it. I hope I will use it and be happy with it for the rest of my life. Software gets outdated, but real hardware just get old. And the Doepfer modules have that sonic power and organic life I wanted, and it surprises me all the time. To use the sequencers, random generators and note scaling modules of the G2 is an intuitive and quick way of creating musical structures that can be realized in the Doepfer. Combining patching on the computer screen and in real life on the same time was also easier then I thought. In fact, it is as intuitive as working with the G2 or the real analogue itself.

The same midi out that feed the 12 channels of CV and gate in the Doepfer MCV24 interface can also control other gear. So I use my older Clavia Nord Modular and Micro Modular as six extra VCOs, as well as an old sampler and a Roland XV 2020 sound module. The possibilities of sound creation become very big.

I could have built the system simply on sound modules, just to get the true analogue sound, but wanted to have some analogue CV processing in the modular also. I had the feeling that it would limit the creativity to use the Clavia G2 for all CV processing. And as and old Buchla fan I could not resist the Doepfer A-149, a clone of the Buchla “Source of Uncertainty”, a module a use a lot.

Of the total rack space, about 40 percent is for creating or processing of CV and gate signals. For making a cheaper system, I could have avoided those modules. But I use them frequently, especially for patterns and rhythmic structures. and don’t want to be without them.

I also have some low budget solutions. I have three different reverb springs that I connect to the Spring Reverb module, and gives totally different sound. One is the original, the second is a long Accutronics spring, “The Hammond-reverb” and one is a folded single spring I picked from an old Traynor mixer. And I frequently use an ordinary radio as source for noise or random sounds.

There are modules that I don’t really use at all. For example A-192, the CV-MIDI converter was a part of my concept, to send sound as well as MIDI/CV in both directions between the virtual and real analogue. But the need has been limited. Of course, it can be fun to use Theremin antennas or a joystick to create hands on midi signals, but it make no real use of it. I had found that module for sale now and then, so I guess I am not the only one that have overestimated the need of that module

Another surprise was the high volume of a filter in feedback. The Doepfer filters are unpredictable in a nice way, but in the same time, they can distort many inputs. To import the analogue sounds into the Clavia G2 is not always easy. The 5 V peak to peak that are an internal level in the Doepfer is too wild for the G2. The levels can be attenuated, but that eats valuable mixers or VCAs.

There are other things that are different in the real world. In virtual patches, I am used to have a flow of CV from a sequencer or random source, and use several S/H to pick up CVs at different timing from that source. A disappointment was that it doesn’t work on the Doepfer. There is a loss in voltage currency in the S/H, and the VCO get out of tune. The solution was to put more of the CV processing in the Clavia machine, but it shows how some of the patching process of the G2 not can be converted to the Doepfer universe.

But the main reason to be happy is the mighty filters, VCOs and sound processors of the Doepfer. They can create really fat sounds that are unmistakable analogue, and has life and power. Among my favourite modules are the A-107 Multitype Morphing Filter, the A-101-2 Vactrol Lowpass Filter and the A-101-3 Modular 12 stage Vactrol Phaser.

Patching in G2 and the Doepfer is equal in some aspects. The time consumption for example, it takes me normally one day or two long evenings to create a patch, no matter if it is virtual analogue, real analogue or a mix of booth.

When used together, the G2 sounds like the weak little brother of a bold warrior, the sonic difference become obvious. But they can do different things in the overall soundscape, and the fatness of the Doepfer makes it impossible to add unlimited number of voices of the same strength. So the relative weakness of the G2 doesn´t has to be a disadvantage, and it is sharp enough do bite through the analogue mist.

I normally use the Doepfer for lead, rhythmic parts and for FX. For the bass, I use the Doepfer, or and old analogue Roland SH 09. Sometimes use the G2 as a sketch book: I make the melodic structure, and use a simple vco/envelope just to get it right. Then I change it to a midi out module, and form the sound it the real analogue.

The G2 is mainly a CV and gate generator, and the emulated CVs are stable and reliable. I also do FM and PM sound on the G2, and some polyphonic chord structures, and use it as a FX unit with delay, chorus and such things.

To me, a G2 or rack version, G2 Engine, is the perfect partner to any analogue modular. With the versatile MCV24 it can be the brain to the muscles of real analogue modular. It can also be used for supporting patches, like virtual VCO banks or patches to simplify tuning of the Doepfer.

To get the same possibilities of voices and audio treatment in hardware that the virtual world of G2 offers is extremely expensive. Happily, the fatness of the Doepfer fills the soundscape pretty well. I have no need for more voices than the seven to eleven ( or something like that, depending on configuration) that I get right now. Around four or five different voices from the Doepfer is about the limit in the kind of music I make, otherwise the analogue sounds flood the whole sound spectra.

It is true, that a special sound or a complex structure in real analogue is very hard to recreate. I fact, when fully patched, it is hard to even know what sounds come from each VCA… But to me the patching process now is more like an event. The patching in the G2 can be preserved, but the rest is more like realizing the project. When finished, I record it, and then the moment is over.