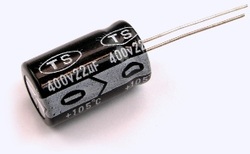 ...and why it is good to change them in old synths


Electrolytic capacitors dry and leak as they age. As a result, your synth won't filter the DC well, you'll get wrong currents running thru circuits and end in a poor performance i.e. "my synth always goes out of tune", or "it takes one hour to warm it up, then it's stable", or worst "it does no longer work".


Typical question: If you recap the synth with more modern capacitor will it change the overall sound or character of your synth? I've heard some tests that prove vintage caps XX sound better than new caps XY.

This is a common mistake when people start to do these 'tests' with old vs. new. To make objective test, you need to have the original XX capacitor as it was in the condition 25 years ago and put it into that test, THEN compare it against other (new) capacitors to see in which category it fits. This is simply impossible. Even if you buy new "old stock", the cap is 25 years old! You will never know how that XX cap sounded 25 years ago. Therefore, these kind of tests are misleading and wrong.


Second classic question: Which brand of capacitors to use when recapping the synth. What if you use brand X instead of Y, will X sound different? I've heard rumors that capacitors sound different. Should i use expensive "audio" grade caps?

Yeah, maybe they "sound" different at 750 MHz with 1:1 000 000 amplification on a signal. But in 0-20kHz and minimal amplification typical for synth, they just can't sound much different. So, if we talk about noise ripple at the high frequency (i.e. radio device) i would agree. If we talk about high current preamp devices, i would agree again. But on a small signal and in 0-20kHz range, difference is insignificant. There is a reason why we use high quality caps, but more on that later. First, my personal experience with different capacitor brands.

When i was recapping (standard caps / same values) my CS-15, after finishing one line (it has two synth lines inside) i compared it with the unmodified one - difference was zero. Second: since i though maybe that test wasn't objective, i did another one on Juno 60 with standard ones vs. high quality Elna and Panasonics. Since the synth can store presets, i could do much refined tests with raw osc, filtered basses and white noise, all recorded on equal volumes. Diference: ZERO. Even on spectral analyzer: the curves are exactly the same.

If anyone thinks different i'd like to see tests and the results - and specially the scientific explanation why would a 100uF "cap x" sound different from 100uF "cap y" in low freq, low current. Signal does NOT know the brand of capacitor through which it flows. It just sees capacity, thus getting impedance on certain frequency, and that frequency get attenuated, either as a HPF (capacitor in series) as in decoupling, or LPF in parallel (to remove unwanted interferences / noise). And that's it.

The reason why we should go with high quality caps is because when such capacitor states 100 uF, it is indeed 100 uF. While some of the el-cheapo ones from China state 100 uF, yet when you measure it, you get 85 uF. If you have 10 such capacitors in the signal line - differences will start to appear (you'll get wrong currents, different filtering, etc).

Second and most important thing why to go high quality is the short living time of China-el-crapo ones. Some of them are so terrible they completely leak out after just 1-2 years. One of my monitoring speakers (don't want to name the brand) stopped working. I open it up - first thing i see is cap leaked out, but so much to the point i though this was the glue! (Note: glue is sometimes used to put larger capacitors in place during soldering). Even in my job office we get many plasmas die out due to cheap Chinese caps. I've also heard of many PC motherboards dying due to leaked caps. What all three failure examples have in common? Heat! The cheap noname Chinese cap that says 105° C is a lie. Don't buy it if you love your synth. Use some better quality capacitor instead. Those would be: Elna, Nichicon, Panasonic, etc.

Question about NOS: My tech did a gread job as he managed to hunt down "new old stock" of original capacitors that are used in my synth. So this will preserve the original 'sound'.

From the basic theory of electrolytic capacitors - a capacitor that hasn't been used for 30 years (NOS) is way way dryer (thus more worst), than the one that has been working on 24/7. That's a fact. So, you don't want a NOS capacitor.